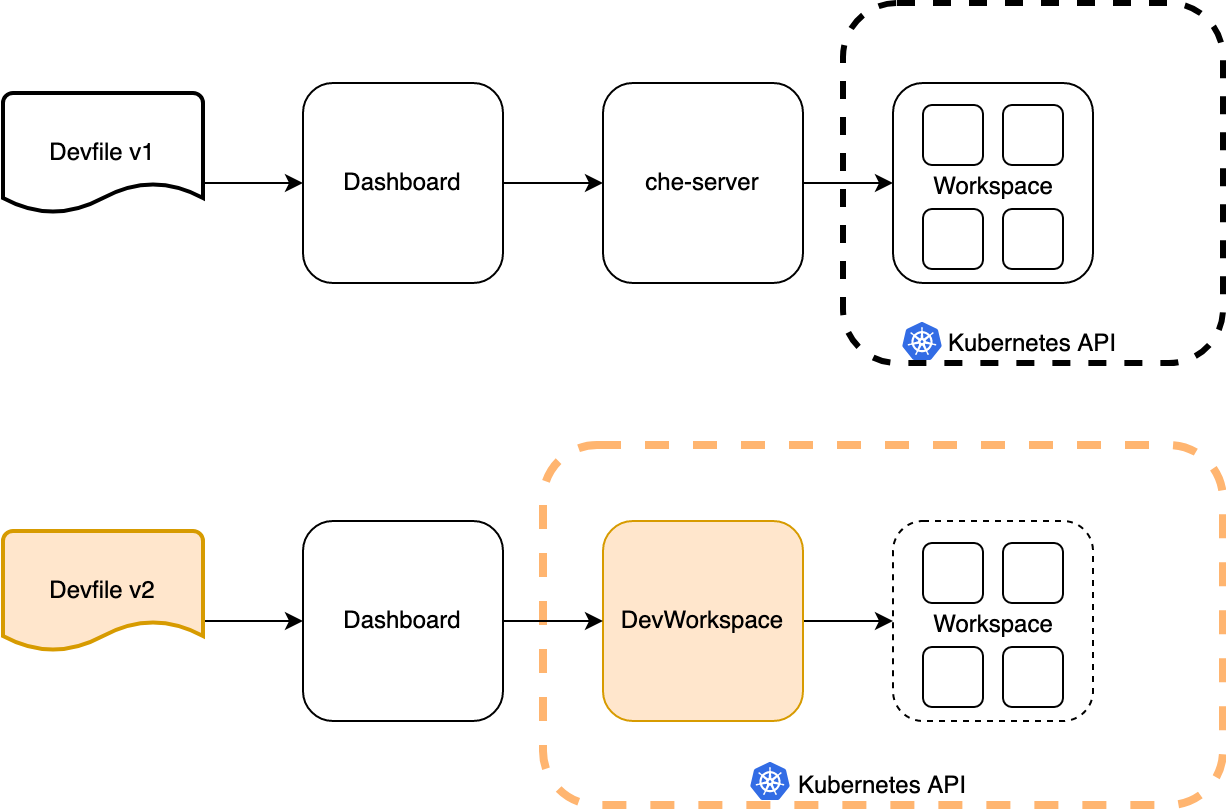 With version 7.28 of Che we have introduced a new workspace engine, the DevWorkspace Operator, that supports v2 of the Devfile specification. Although the default engine is still the che-server we plan to replace it with the DevWorkspace in the next few months.

Switching to the DevWorkspace engine has some important consequences. Notably on the authentication subsystem that will be lighter and more flexible, on the workspaces network managed by a central gateway powered by Traefik and simpler configuration options for Che administrators.

How to enable the DevWorkspace Operator

The command above works for other Kubernetes distributions too (-p openshift should be replaced) but, after chectl has completed, the CheCluster CustomResource requires a patch:

Changes from a Che user perspective

Here is an example of v2.1 Devfile:

The Devfile specification has gone through the release of v2. Here are a few notable changes:

The documentation for Devfile v2.1 is https://devfile.io/docs/devfile/2.1.0/. A migration guide from v1 to v2 of the specification is included.

A new way to specify the editor and its plugins

As mentioned above, version 2 of the Devfile, doesn’t include cheEditor and chePlugins component types anymore.

The recommended way to specify the editor of a workspace is to include the file .che/che-editor.yaml at the root of the workspace git repository:

The recommended way to specify a che-theia plugin in a workspace is to include the file .vscode/extensions.json at the root of the workspace git repository:

It is also possible to define a Che editor and its plugins inline in Devfile attributes, but that’s recommended only when it is not possible to colocate the devile with the source code. More informations about IDEs plugins with v2 of the Devfile can be found in this blog post and at https://github.com/eclipse/che/issues/18669.

The Devfile should live at the root of the git repo, not in a registry

The recommended place to publish the Devfile is within the project source code. Along with the files that we have just seen above to specify che-theia plugins and the editor:

Having the Devfile at the root of a repository makes it possible to use a simple factory link to the repository to start the workspace. For example workspaces.openshift.com/#https://github.com/eclipse/che-docs is a factory link: when a user click on it, a workspace defined by the Devfile in the repo github.com/eclipse/che-docs will be started on the public Che instance hosted by Red Hat at workspaces.openshift.com.

Recommending to colocate and evolve a v2 Devfile with the source code has two consequences:

Only one running workspace per user

A user cannot have more than one running workspace at a time. This limitation is related to the persistent volume strategy (“common”) that is used by Che. The same Volume is mounted by every workspace of the same user. This is implemented using Pods volumeMounts.subPath property and guarantees that the number of Volumes mounted by Che matches the number of users.

Although most of the work has been completed, Che with the DevWorkspace enabled is not ready for production yet. Here is a list of open issues:

The complete list of issues and the due date can be tracked on the GitHub milestone.

In this post we have described how to enable the DevWorkspace engine and reviewed the changes from the point of view of a user of Che.

In the second part of this series we are going to look at the changes from an administrator point of view:

The third part of this series will be about the DevWorkspace Operator: